Terry holds a Master Plumber’s License with the State of Montana. He has 40 years experience with plumbing, welding and pipefitting. Before starting Galle Plumbing & Heating, he served an apprenticeship with the Plumbers and Pipefitters Local No. 41 and was briefly head plumber at Galen State Hospital. He has worked on major construction projects throughout the United States and has been involved with the design and construction of important projects throughout the region.

Jeff has been an estimator and project manager for Galle Plumbing for 12 years. He attended the University of Wyoming for four years, where he pursued an architecture degree. He possesses extensive training and experience with state-of-the-art software used for estimating design build projects and job tracking and scheduling.

David has been with Galle Plumbing for 16 years. As a superintendent, he has overseen several of the company’s major projects, including work at a new medical center in Deer Lodge. He holds valuable field experience and also is well-schooled and practiced in project management.

Charlene has been an owner and business manager at Galle Plumbing for more than 25 years. Previously, she was a maintenance secretary and bookkeeper for Warm Springs State Hospital for three years. 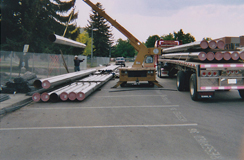